6/3/17: We wanted to get to Grand Marais before 3PM as there were storms forecasted. It was about a 6.5 hour journey, so we got up around 5:30AM. The forecast for the morning called for winds of less than 10 knots and waves calm to 1 foot. We learned that even NOAA can be just as wrong as the TV meteorologists.

About 2 miles outside the harbor, the winds were already 20 knots, and the waves were 1-2 feet. We thought maybe it was just local to Munising, so we plodded on. After another 5 miles, we had 25 knot winds and waves 2-3 feet. We both laughed because we thought we might have heard the wrong forecast (we didn’t). During our 35 mile jaunt, we never saw winds less than 20 knots, and we measured one gust over 30! The waves followed suit; by the time we got near Grand Marais, they had built to 4-6 feet. Needless to say, it wasn’t quite the calm ride we had expected.

The scenery from Munising to Grand Marais was amazing. Just outside of Munising are The Pictured Rocks. They were breathtaking and our photos don’t do them justice. Multi-colored bedrock cliffs (some 200 feet high), sea caves, and waterfalls can be found along 15 miles of the lakeshore. There are daily tours available, and if we were to take one, we would do it in the afternoon or early evening, as the sun at that time would really bring alive the colors of the landscape.

A little further down the shore is the Au Sable Point Lighthouse, followed by massive sand dunes. About 10 miles of shoreline is nothing but one huge dune which had to be at least 100 feet tall. Impressive is an understatement. We coUldn’t tell if there was beach at the base of them or if the just dropped right into the lake.

Just after the dunes, you come to the breakwater for Grand Marais. A long channel between break walls leads to an inner harbor about 1/2 mile across and 3/4 mile long. At the far end is the town, and a small dock where we tied up for the night. The “marina” was managed by the local campground, and they sent someone down to check us in.

Grand Marais is a tiny town – a main Street about three blocks long. There’s not much here but a small grocery store with gas station, a couple of restaurants, a hardware store, a couple of inns & motels, a campground, and a couple of gift shops. But it’s a nice little town with some beautiful scenery and awesome beaches. We ate at The Lake Superior Brewing Company, a bar that served food, but also had a separate dining room area. We ate in the bar area. The Lake Superior whitefish basket was awesome! It was a good portion of lightly battered, freshly caught whitefish served with fries. They also made their own root beer, which was also very tasty. Several people came in while we were eating to have their “growlers” filled. 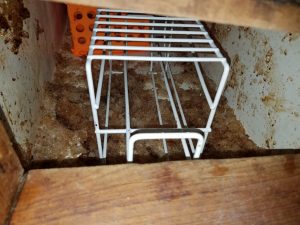 Ok, so a side note experience. For the past couple days we had been hearing these strange (and loud!) popping noises that we had never heard before. We looked over all our hardware and were starting to think of odd alternatives. We thought maybe it was the Kimberly Clark plant in Munising. Or maybe it was the expansion and contraction of our new fuel bladder when it was completely full. Or waves just slapping the hull oddly once in a while. But tonight, we discovered the source! Pat was cleaning the side door to our ice box, and opened it to discover a 12 pack of soda cans in the bottom, all frozen and exploded. Apparently, the bottom of our ice box is really, really cold! Now we just have to deal with 144 ounces of frozen soda that is frozen to the sides and bottom of our ice box! We are saving that fun for another day…

If the weather cooperates, we will be heading towards Whitefish Point tomorrow, and plan to spend the night in a harbor of refuge before our final leg to Sault Ste. Marie. We have travelled 307 miles to this point; it’s hard to believe this is the same body of water you see in Duluth and Bayfield.