Roys Point Marina, where we kept Shanti, is 2 miles north of Bayfield, WI. It’s a tiny town, population 487, but is a well-known tourist destination. During our 5 years sailing The Apostle Islands, we spent a lot of time there and came to love it’s unique charm. Since it caters to tourists, there’s lots of little gift shops, several bed & breakfasts, and many great restaurants. And if you’re into boating or sailing, there’s 12 marinas within 20 miles, three of which are right in town at the waterfront.

Besides the gift shops, Bayfield has several great restaurants to choose from. We’ve eaten at most of them. Our favorites, though, are The Egg Toss (great breakfasts and awesome muffins!), The Broad Street Eatery (the Chicken Döner is excellent!), and Sgt. Pepperoni’s Pizza (hey, it’s good pizza!). We also have to give a shout out to The Candy Shoppe, with its dozens of flavors of ice cream, great fudge, and wine bread (yes, WINE bread)! There’s also a local grocery store, an Ace Hardware, a couple boating chandleries, banks, motels, and a gas station.

Update as of 3/21/07:  We decided to have dinner at the Broad Street Eatery a couple weeks ago.  After driving to Bayfield, we discovered that they had had a kitchen fire just that morning and would be closed for repairs!  A sad loss.  We wish them well and hope for their speedy return to business.

Ferry and sailboats in Bayfield

There’s a lot to do and see in Bayfield. On any summer weekend, you’ll see hundreds of people meandering the streets, shopping, eating ice cream, or just walking the docks sight-seeing. There are always sailboats, powerboats, and fishing boats from early spring (April/May) to late fall (October/November). A ferry crosses to Madeline Island, which has several restaurants, coffee houses, and markets. There’s also kayak, paddleboard, and canoe rentals; sailboat rides and chartering; camping and hiking; golfing and horseback riding; and several beaches around the area. One big attraction is the Lake Superior Big Top Chautauqua. It’s a small, outdoor performing arts venue held in a large tent. It features many local, regional, and national musicians, and has had some pretty big names on it’s schedule. Willie Nelson, Bonnie Raitt, Gordon Lightfoot, and Three Dog Night are just a few we can think of off the top of our heads. 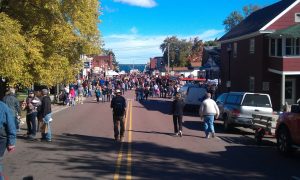 Bayfield has several apple orchards and berry farms where you can pick your own fruits and berries. Some have gift shops where you can purchase home-made products like jellies, jams, ciders, and wine. Once a year, the town hosts it’s biggest event, Apple Festival. It’s held for 3 days every October, and attracts thousands of visitors each year. All of the orchards and farms set up stands to showcase their goods. Here you will find all things made from apples: pies, tortes, dumplings, cider, butter, jams, jellies, sundaes, caramel apples, and even bratwurst (apple brats are quite tasty)! There are also arts and crafts booths, a small kid’s carnival, and standard food carts, too. We went 4 years in a row, and wouldn’t hesitate to go again in the future! 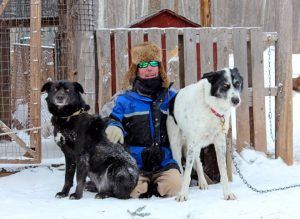 If you like winter, there’s plenty of events and attractions during those 11 months (joke)! Probably one of the most popular are the Ice Caves. Besides the Chamber of Commerce link, just Google “Lake Superior Ice Caves” and you’ll find dozens of sites with more information and pictures. They’ve even been written about in USA Today! And while we’ve never been there, we’ve been told the formations are breathtaking. If you’re into mushing (or you just like dogs and people having fun), there’s also the Apostle Islands Sled Dog Race. The picture to the right is our friend Jim from Roys Point Marina featuring a couple of his buddies from Jim’s Team. Being Northern Wisconsin, there’s also the regular gamut of activities such as cross-country and downhill skiing, snowboarding, snowshoeing, and snowmobiling.

Bayfield is a great little town in northern Wisconsin. We are fortunate to have spent as much time as we did there. We both agree that if the winters weren’t so darned cold (and long), this would one place to consider living!