Shanti’s electronics and navigation systems were outdated. The radar was a Raytheon R11XX and the charting system was a Raytheon Raychart R601XX. Both were from the 1990’s. It still had a Loran-C unit installed (the Loran-C system was largely shut down in 2010). The knotmeter didn’t work. Her Autopilot was an Autohelm 4000, and the drive unit fell apart on us during our first year. It was time for some new equipment.

Right after we purchased Shanti, we tried to get Lake Superior charts for the charting system. It was then that we realized how outdated the navigation system was, as the chips hadn’t been available for several years. And since the Loran system was no longer functional, that unit didn’t work, either. And we discovered right away that the knotmeter didn’t read anything (not that that is really important, but it was just another thing that we now didn’t have). The only thing that did work was the depth meter (thank God!) We decided to pull out all the old electronics, and just use a handheld GPS until we could afford new equipment. We bought a Garmin GPS 72H, which was our only navigation equipment on board for the first three years. 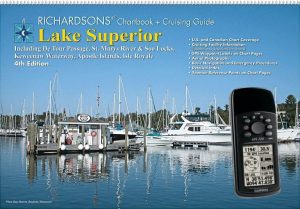 What we used our first 3 years

The handheld GPS and paper charts (Richardson’s Chartbook of Lake Superior) worked great for cruising around the Apostle Islands, until one late fall day during our second year. It was our last weekend of sailing before haul out. We had already taken home most of our cushions, perishables, clothing, etc… We dropped anchor in Quarry Bay, 15 minutes before pea-soup fog covered us. The next morning it was so thick we couldn’t see the bow of our boat. But if we went slow, we could get back using frequent GPS fixes and our charts. We turned it on; it read 20% battery. And we had already removed all of the extra batteries from the boat! We weren’t going anywhere. It was 2:00 that afternoon before the fog lifted, and we didn’t get back to the marina until 4:00. It was then we decided new electronics (especially radar) were in order!

Our system grew over time, but we knew the first pieces we wanted: a chartplotter and radar! We thoroughly researched the big players: Garmin, Furuno, Raymarine, Navico (maker of Simrad, B&G, and Lowrance equipment), Standard Horizon, and Si-Tex. They all make great equipment, and they all had pluses and minuses. It was a tough choice, but we ultimately chose Navico (B&G), for two reasons. First was their 4G radar, and second their compatibility with 3rd party charts.

Their 4G Radar is the only FMCW radar currently sold to consumers. FMCW is a radar technology that uses a continuous transmission of radio waves rather than short bursts or pulses. It’s designed to use much less power than traditional radars. The 4g transmits only 20W whereas pulse radars transmit at 2,000W or 4,000W (and only 2.9W in standby vs 20W or 40W). This equates to a much lower current draw (1.5 amps vs 4 amps or more), which is great for the battery! It also has no warm-up time (instant-on), offers an extremely close range of operation, and has incredible precision and clarity (yes, we really can see ducks swimming in the water 10 feet away on our radar screen).

Chart compatibility was also a deciding factor. Besides the proprietary charting software that each of the big players offer, there are two other third party electronic chart manufacturers: Jeppesen C-Map and Navionics. What we learned during our research is that each of the three (proprietary included) had strengths in certain geographic areas but weaknesses in others. Because we didn’t know where we were going to cruise, having the ability to choose the most accurate chart for a given area was important. At the time, Simrad and B&G (both Navico) were the only two that offered BOTH C-Map and Navionics (Raymarine has since started offering both, as well). We were sold. 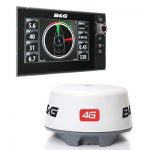 Once we decided upon Navico, the last decision was: which brand? When you research the different brands, you quickly come to realize that they are trying to accommodate different markets with each brand. Simrad wants to target the powerboat, commercial, and sportsfishing markets. B&G is focusing on the sailing crowd, both racers and cruisers. And Lowrance is targeting the angling market. Our decision was easily made: B&G. We purchased the B&G Zeus2 and the B&G 4G radar unit. We also had to add the RC42N rate compass, which allows the radar to overlay onto the chart (a really NICE feature)! 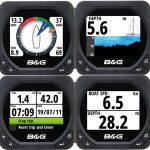 We now had a chartplotter and radar (big YAY!), but were still using the old depth sounder, and our knotmeter still didn’t work. Between our 3rd and 4th season, we stored Shanti inside. During that time, we replaced both depth and speed transducers with brand new Airmar NMEA-2000 compatible units. We also added a Maretron WSO100 Weather Station at the top of the mast, which measures not only wind speed and direction but also air temp and humidity (also NMEA-2000). To top it off, we replaced one of our bulkhead mounted instruments with a new B&G T41 multi-function instrument. Since everyting is now NMEA-2000, we can see all this information on either the chartplotter, the multi-function instrument, or even a laptop down below! 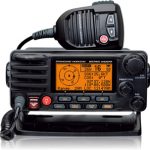 Somewhere around that same time, we had read about AIS and it’s benefits. While we didn’t really need it for just cruising the Apostle Islands, we knew at some point we would want it (at least to see other ships). While looking into chartplotters, we saw that Standard Horizon had just come out with their Matrix GX2200. This little baby has AIS/GPS/DSC AND an NMEA-0183 interface! Wow! All that in a VHF Radio? Well, all righty then… Since our VHF WAS getting older, we purchased it. Added to that was an Actisense NMEA-0183 to NMEA-2000 converter, and now we had AIS targets displaying on our chartplotter (and another source of GPS, wiht DSC to boot). Awesome!!

After our summer of fuel tank woes (see our Fuel Tank post), we also wanted a fuel tank gauge. We purchased one with our new tank, but it was a capacitance unit and didn’t really work that well. Over the course of 5 or 6 hours of use (maybe 5 gallons?) it would drop from full to half. That just wasn’t right, so we replaced it with a Maretron TLM100 ultrasonic sender (also NMEA-2000). We also had to purchase their USB100 gateway just to program it for our tank ($250 to change the 40 inch depth to 7 and click “Save to Device”). But now that is also integrated into our system (and to be fair, we were also able to program the change in level relative to the odd shape of our tank). Woo-Hoo people, now we are cooking with gas (or diesel, as it may be)! 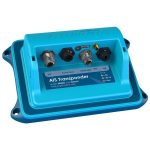 Now, during our last winter before our big adventure, we are adding an even better AIS system. We can now see other ships on our system, but they may not see us. So we are putting in a Vesper XM-8000 AIS Transponder. This unit will allow us to both receive AND transmit AIS data. It has a built-in WiFi, so we can interface it with a smartphone or a tablet. It also comes with an NMEA-2000 gateway, so we can connect it via USB with our laptop. AND, as an added bonus, we bought their antenna splitter, too, so we can connect our AM/FM radio to the VHF antenna! Really cool!

We really want autopilot, but we are faced with some significant challenges there. For sailboats with quadrants, they come in 3 flavors: ram, wheel, and cable driven. Our quadrant area isn’t quite large enough to accommodate most rams. And the one or two that would fit would require some serious structural work for mounting. The cable (and ram) both require installation of a tiller arm, but our rudder post doesn’t have a keyway or a set screw hole. We would have to drop the rudder and modify the post just to install the arm. And Raymarine makes the only viable wheel pilot, but Shanti’s displacement is a little over it’s limit, and it wouldn’t interface directly with our system. We are still looking for alternatives (and may decide on the Raymarine), but for now, we may just go without. 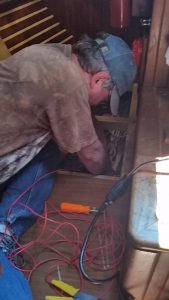 Running power to the electronics 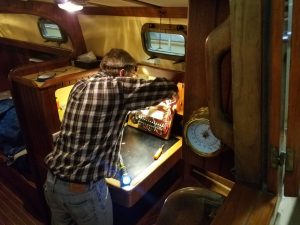