The past two months have been a whirlwind. As we sit in our motel room, contemplating the past weeks and our departure to come, we cannot believe how much work it was to get where we are. We had many long, hard days, some of them so chaotic and stressful, we wondered if this trip would be worth the effort. And saying good-bye to family, friends, neighbors, and co-workers has been especially hard. But here we are, waiting for the weather to clear, planning to leave within a day or two. 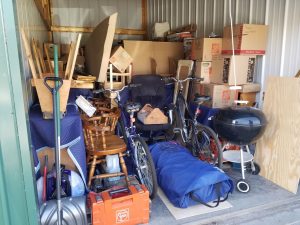 All our crap, stored away!

Our last days in Eden Prairie were hellacious. Nothing seemed to go as planned, and we both felt totally overwhelmed with frustration. We quit our jobs on May 14th, but at the last minute, Kate stayed on part time for three weeks to help her employer. We found renters, but they wanted an earlier move-in date than we expected, so we had less time to prepare the condo and get ready for our departure. We rented a U-Haul for our furniture, but realized when we picked it up that it wouldn’t be big enough, resulting in an extra trip to our storage unit. We hired movers for the really big furniture, but they never showed up, even after confirming they were on the way over! Three days before we were to be out of our condo, the water heater went out and we couldn’t get it started, so we had to replace it. The marina called and wanted to launch Shanti a week early, so we had to figure out how to make that work in our already mixed up schedule. The condo association decided to renovate our lobby over this past winter, but it got delayed until, yep, you guessed it, the same time we were moving out and our renters moving in. It was hell.

We also said goodbye to our friends and coworkers. This was very hard, especially for Kate. We had several going away dinners and happy hours, and she had tears during all of them. And she does now, too, as we look back and think about it. We never would have imagined how much they all became a special part of our lives. Kate says she looks forward to fall, when we will be coming back to visit, so we can catch up with everyone in person. 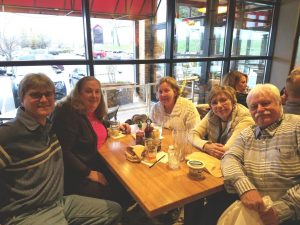 Dinner with our awesome neighbors! 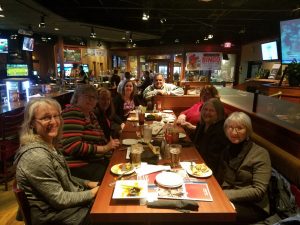 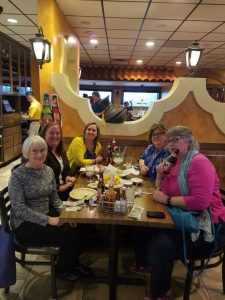 Our time in Washburn

We moved to Washburn on April 20th. Pat came first for Shanti’s launch; Kate finalized things at the condo and came a few days later. Launch day was clear and sunny, and went without hitch, but we didn’t raise her mast due to several other launches that day (it was raised about a week later). We loaded most of our clothing, toiletries, and non-perishables. A couple days after launch, it snowed. A few miles east of Washburn, it was freezing rain and sleet – enough to bring down trees and power lines. We hunkered in for 3 or 4 days while that system passed. After the mast was raised, we put up the sails and canvas, and worked on various projects. We also loaded more food (and even more food!), and topped off the diesel, water tanks, and propane tanks. We did a quick inventory and were ready to go! That was about a week ago. Another storm system came. It brought about 7 inches of rain, a tornado that wiped out parts of Chetek, WI (about 70 miles from here), washed-out roads, and flooding in various places. We are still waiting for that system to completely pass before leaving. As we write this, there is one more system coming in, which we will wait to pass before leaving. It’s been cold, and rainy, and just plain miserable, and we would like to enjoy the trip, so we’ll wait! 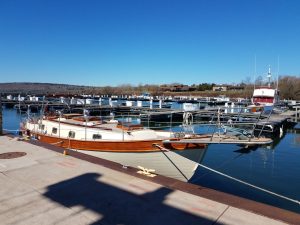 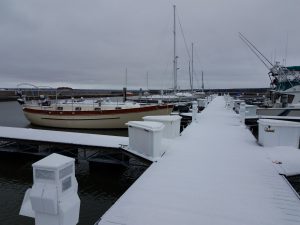 The marina, a week later. Dreary.

We also took a few trips to say goodbye to family. We spent a few days at Pat’s Mom’s, and a few more at Kate’s parent’s and aunt’s. Kate’s daughter drove from Illinois to Minnesota on Mother’s Day to say goodbye to her Mom. Our visits were nice, but also sad for many (especially Kate, who was able to spend time with both her Mom and her daughter on Mother’s Day). We called Pat’s Dad and his wife to let them know we were leaving (they live in Arizona, so we weren’t able to visit). They had done this exact same trip about 15 or 20 years ago, so it will be interesting to see how our trip compared to theirs. Of course, on all our visits, the weather was absolutely beautiful! Go figure!

It’s been a long road getting to where we are, and we are now looking forward to our departure. Kate’s parents and aunt are here to see us off, and to take the car back to Minneapolis, to be stored away for a few months. We are excited, and anxious, happy and sad, but we are ready to go. First stop: Black River Harbor, Michigan! 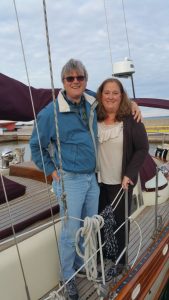 4 thoughts on “Final Preparations and Departure”